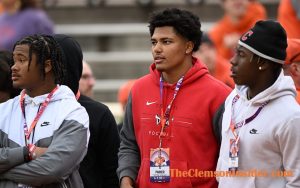 Clemson’s football program has started its second engagement in as many days.

Parker (6-4, 250) chose Clemson over numerous other offers, including his other finalists at Penn State, Tennessee and Texas A&M.

Clemson made an offer to Parker on August 11 after he resigned from Penn State a few days earlier.

“I’ve always wanted to say that Clemson offered,” Parker told The Clemson Insider shortly after the offer. “We talked for a while and when I got the commitment off some of my friends that I know – Peter Woods and (Christopher) Vizzina – messaged me and said, ‘Bro, would you be interested in Clemson?’

“Are you kidding me? Of course!”

Parker made an official visit to Clemson for the Oct. 22 game in Syracuse and returned to campus last Saturday as an unofficial visitor for the Miami game. He also unofficially visited Tiger Town for the September 10 Furman game.

“I definitely rock with Coach Hall and Coach Eason,” Parker told TCI after being offered by Clemson. “We’ve been talking for a good year now. We got to know each other really well. He knows my family very well and we talk all the time. We’ve talked every day since I quit (from Penn State), and before that we talked whenever we talked. I like Coach Hall very much. He’s a great coach. I feel like if I went to Clemson he could get me where I want to be in life.”

Parker is ranked #45 overall prospects in the 2023 class by 247Sports, who consider him the #5 in Yellowhammer state and the #6 defenseman nationally.